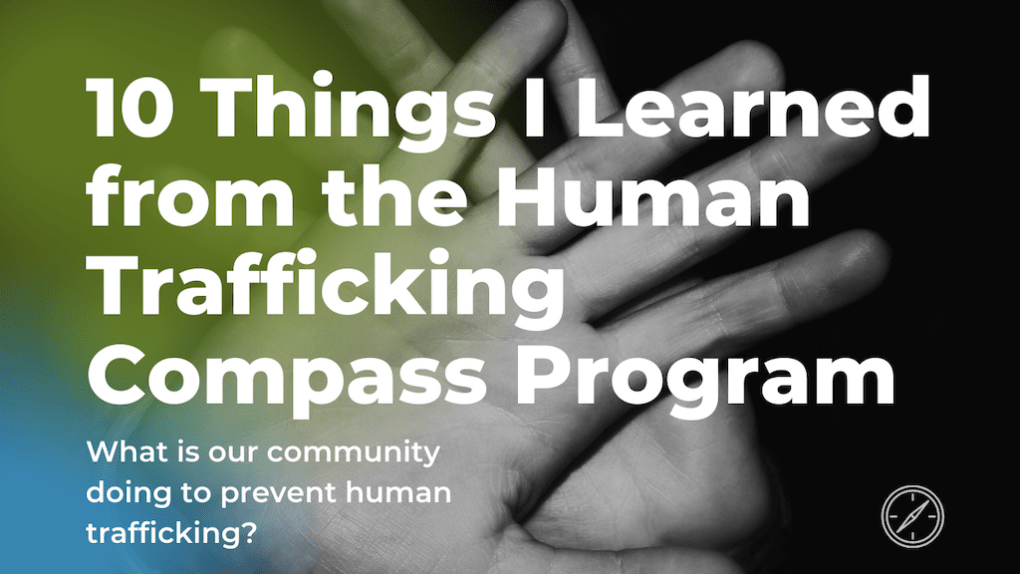 On one of our recent Compass Programs, we talked to community experts about the ways their organizations are working to end human trafficking in the northern suburbs. We cover a range of topics that impact the community in our Compass Programs.

As a young woman living in Minnesota, this compass program hit extremely close to my heart. Here are my top ten takeaways.

1. “Traffickers really exploit the vulnerabilities of these victims,” said Jones.

Traffickers intentionally seek out victims who are struggling from a range of problems from homelessness to addition. They manipulate those struggling into thinking that they can help them, when in reality they just want to exploit them.

2. “We like to think of individuals that are trafficked being in a certain culture, whether it’s inner city, low income, even women of color, but unfortunately trafficking breaks all that,” said Wohler.

Many people think that they or their peers could never be trafficked because of their background, but this is not true. Anyone can become a victim of human trafficking.

3. “The Super Bowl was the thing that prompted the sex trafficking and prevention training bill that passed in the spring of 2018. This law requires that hotels and motels in all of Minnesota provide specific training to their employees,” said Wearn.

4. “The primary reason that it’s difficult to identify victims is they don’t necessarily see themselves as a victim,” said Jones.

Traffickers use manipulation tactics to keep the victims from seeking help. Victims can develop Stockholm Syndrome where they rely on their trafficker for everything.

5. “A lot of times when you’re in trauma, you are not thinking, you’re surviving,” said Wohler.

When someone is experiencing trauma every day of their lives, it’s difficult to look further into the future than 48 hours. Victims are unable to see a future where they are free, so only focus on basic needs to get them through the day.

6. “Back in 2018, the Roseville Police board partnered with Source on a three-pronged approach, education enforcement, as well as the off-ramp to recovery,” said Wearn.

Wearn and Wohler’s organizations have been working to help stop human trafficking for just over three years. Together, they are helping educate officers and hotel workers on identifying this issue.

7. “Most of the solicitation is done online. It is done through different websites, so it is a whole different global internet world for everything,” said Wohler.

Because of the internet, it is now easier than ever to facilitate human trafficking. This has made it more difficult to identify who is a trafficker.

8. “In Roseville, we have 12 hotel properties, and the majority of the properties do work with the police,” said Wearn.

Roseville is taking direct action to stop human trafficking in their hotels. They are working with law enforcement to learn how to identify when it’s happening.

9. “Through law enforcement, through service providers, through employees at hotels, through churches, through neighbors that see things going on, for women to know, that there’s people that care for them,” said Wohler.

There is a stigma around women who have fallen victim to human trafficking. However, there are many organizations who want to help them without judgement.

10. “In terms of how the community can continue to help with these efforts, the really general slogan of, see something, say something, is going to be really huge,” said Jones.

If you see something that just doesn’t sit right with you, don’t hesitate to call law enforcement. You could be saving someone’s life.