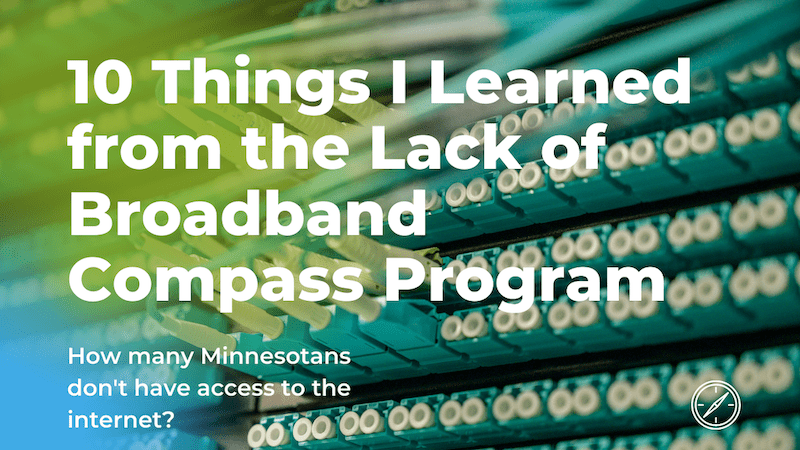 Last month, we held our first compass program. This is a show where we talk with community experts about topics that impact our communities. This episode was about the lack of broadband in suburban and rural communities.

Here are my top ten takeaways.

1. “Around 15% of rural Minnesota, which is 157,000 households, are unserved by a broadband connection,” said Zacharias.

Internet access has become an essential part of everyday lives, especially with so many employees working from home and students attending class online.

In order to be an informed democratic society, people need access to the internet.

3. “The Office of Broadband Development has maps that show, in Minnesota, where there is broadband and where there’s not,” said Boroff.

The Minnesota Rural Broadband Coalition created the Minnesota Speed Test initiative that tracks internet speeds at households across the state. The Coalition then adds these to the map.

4. “Due to low population density it’s simply not profitable for for profit companies to make the investments necessary to build broadband in sparsely populated areas,” said Joselyn.

Many internet companies are hesitant to build broadband in rural areas, because it is expensive. It can add up to $18,000-20,000 a mile per drop.

This is the Coalition’s goal in the upcoming years, but they need the exact funding to make it happen.

6. “The state and the Office of Broadband under deed, which is funded by the legislature, has been a leader in providing funds to address that financial challenge in those limited areas that are difficult and expensive to serve,” said Boroff.

Minnesota officials and the Office of Broadband are making efforts to expand internet access through grants and other financial assistance.

7. “Almost a quarter, 23% of all new jobs created in economies are directly attributable to broadband and broadband connectivity,” said Joselyn.

With so many people moving to work from home, fast internet speeds are crucial.

8. “An increase in just the adoption and the use of broadband could grow our economy here in Minnesota by over half a billion dollars,”said Joselyn.

A number of people have created online shops in the past year which would be impossible without at-home internet access.

9. “In March of this last year, the United Nations Council of the General Assembly declared access to the internet a basic human right” said Joselyn.

Fifteen years ago, having internet access at home could be considered a luxury, but not anymore. Yet, many Minnesotans go without broadband access because of their zip code.

10. “Households that have a broadband connection can save over $8,000 a year simply by moving their interactions online” said Joselyn.

Expanding internet access is an investment that could help many Minnesotans financially.

These are just a few of my takeaways from the discussion. If you want to learn more about broadband expansion, please watch the full program here.

We cover a variety of topics in our Compass Program. Check out our past episodes here, and I’m sure you will find something that will spark your interest.