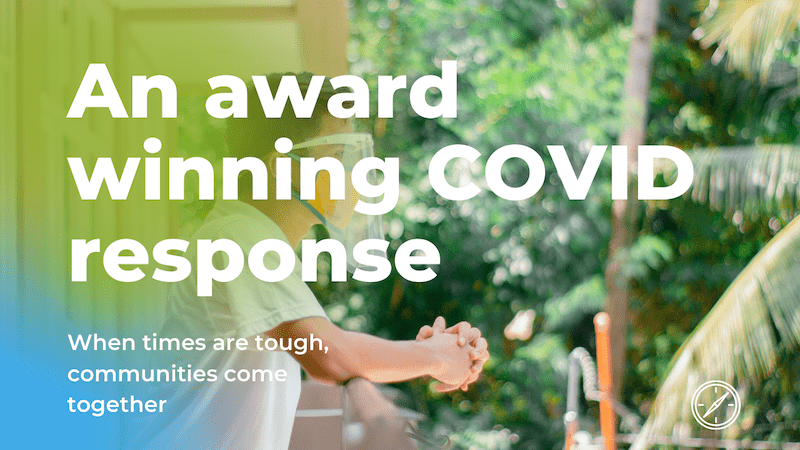 When the COVID wave first hit the United States, communities came together to help those who were most vulnerable. Shoppers volunteered to buy groceries for the elderly, people donated money to nonprofit organizations and this high school robotics team created and distributed thousands of PPE.

Our Executive Director Dana Healy spoke with the volunteer coach of the KnightKrawlers Robotics Team of Irondale High School Scott Davis on our Cities Speak podcast about how his team supported essential workers this year.

Davis has been the robotics team coach for the past six years. While he doesn’t teach at Irondale, he has spent seven years teaching at St. Mary’s University as an adjunct professor.

Currently, he owns a company that creates mobile games for worldwide users. He also helps other companies build software products.

Six years ago when Davis’s daughter was a freshman in high school, she decided to join the robotics team. Davis then asked one of the coaches if they needed any additional help.

The coach told him that they needed help with software which luckily is one of Davis’s areas of expertise.

The team of typically 40-50 students meets year round with optional meetings in the summer and training in the fall when school starts.

“The game is announced in January, and we start designing and building and programming our robot to compete in March, April, May,” said Davis.

There are a variety of different tasks team members complete for competitions. There are students who build the robot, students who work with electrical and air flow components and even students who do business and public relations.

“The team basically runs like a high-tech business and we put our students in charge of making things happen,” said Davis. “These students are understanding how to work like professionals.”

Davis submitted an application for an award under the category for community COVID response. The Minnesota Technology Association recognized the KnightKrawlers statewide for their work 3D printing face shields for essential workers.

After the state cancelled all school competitions, the team had a lot more time on their hands.

Davis asked the principal if he could borrow the other seven 3D printers in the lab to print face shields.

The principal responded with an even better offer.

The principal suggested gathering all of the 3D printers in the school district, putting them in one large space and letting their team run the lab from there.

Davis passed this information onto the other coaches and team captains. They wanted to do it, but also wanted to make sure they could do it safely.

With help from school administrators, they put together a health safety plan in 24 hours. Once the school board and administration approved the plan, they were ready to get started.

The lab ran six days a week, ten hours a day with shifts in the morning and afternoon.

In just the month of April, they printed 5,000 visors for face shields. Then they started cutting the plastic for the shield part.

3M donated two large rolls of plastic to the team. This was enough to make 11,000 face shields.

However, there was only so much staff and printers to make a thousand visors a week.

The team decided to reach out to other robotics teams, organizations and community maker groups to see if they would print and donate visors to their lab.

Local teams and organizations heard their request and donated enough visors for the lab to make 12,000 in April and 4,000 to 6,000 in May.

While the team had to seek help collecting visors, they had plenty of extra plastic which was becoming difficult to find in other parts of the U.S. They ended up shipping enough plastic to make 26,000 face shields to Arizona, Portland, West Virginia and more.

“That helped them then make face shields that they could give to their hospitals and self servants,” said Davis.

When asked how the students responded to the different kind of season, Davis said it was just business as usual.

During a typical season, the team would have six weeks to build a robot. These weeks are usually hectic and the students have to learn to adapt to a changing environment.

“It was just like another day showing up at robotics. They just walked in, they put their head down, they got to work and they cranked stuff out,” said Davis.