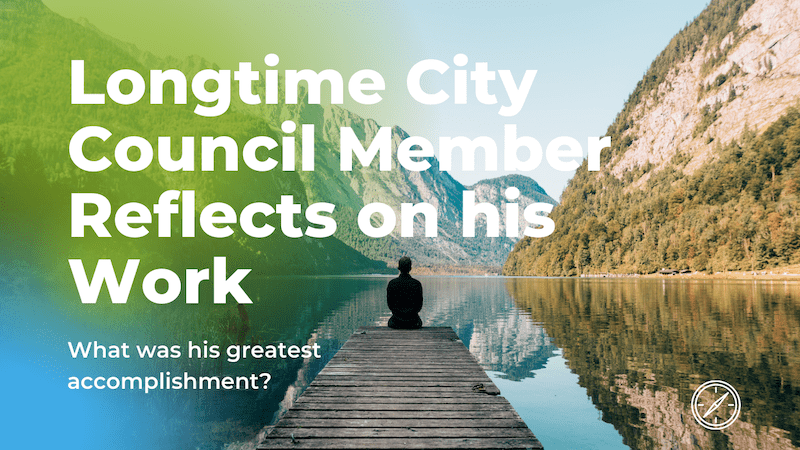 Rick Montour has been an active member of the city of Little Canada since he moved there in 1994. He first became involved in the Recreation Association as a board member. From 1995 to 2000, he served on the Planning Commission.

After that, Montour began his 20 year tenure on the Little Canada City Council. He’s also served on the North Suburban Communications Commission for 20 years, being inducted in the NSAC Hall of Fame in 2014. He helped guide the organization through two 10 year franchise agreements and numerous strategic planning initiatives. Our Executive Director Dana talked to Montour about his time serving on these committees on our podcast.

Although he achieved all of these accomplishments, Montour said his biggest accomplishment was more about the collaborative nature of the city council.

“You have to determine what’s good for the city as a whole and work together with your fellow council people to do that. I think when you take personal agendas off the table, you’ll find that collaboration is much easier to work with,” said Montour.

Along with his work on councils and commissions, he was an avid participant in Canadian Days which is the city’s annual celebration. Volunteers work all throughout the year to put on this three-day event.

Montour was involved with picking a winner of the car show, but his favorite part is hosting residents from Little Canada’s sister city Thunder Bay which is a small town in Canada about an hour north of Duluth. He, his wife and his neighbors make lunch and refreshments for the Thunder Bay residents every year.

“I’ve developed a number of long-term relationships with many of the residents that come from Thunder Bay. I’ve got to know a lot of people and it was because of my opportunity to serve as a council member in the city of Little Canada,” said Montour.

Honoring those who served

Montour said one of his top five achievements in his time on the council would be the construction of Veterans Memorial Park. A resident approached the council and pointed out that their city did not have a space to honor veterans.

The council then put a call out to residents, specifically those who were veterans, to join a committee to create a memorial. They held many meetings and decided that they wanted to build a memorial by the pond along Little Canada Road.

“It’s a great place to go and reflect and sit and think about the service that the veterans provided. We welcome everybody to come up and take a look at it,” said Montour.

While serving on North Suburban Communications Commission, the committee went from using public access to using a community media center which happened to be NineNorth, CTV at the time.

Most of the cities on the council are not big enough to fund their own community access center, but they were luckily able to work with NineNorth who covers 9 cities in the area.