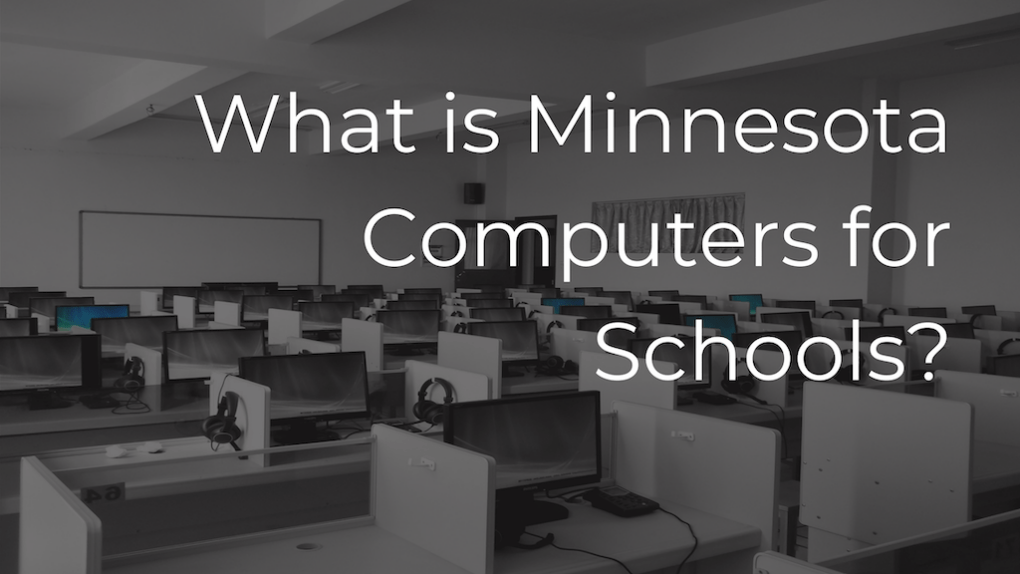 In 1997, former Minnesota governor Arne Carlson created the nonprofit organization Minnesota Computers for Schools. Their mission is to bridge the digital divide and opportunity gap in Minnesota.

Our Executive Director Dana Healy virtually chatted with Katie McMahon, the Communications Manager of Minnesota Computers for Schools on our podcast Cities Speak.

Individuals, typically businesses, donate their old computers to the organization, and they will refurbish them and put them in Minnesota schools with students in need. “When we’ve got business donors, we get three to five year old computers that still have a lot of life left in them that students can use for a handful of years,” said McMahon. They also provide IT workforce training to people with barriers to employment.

Minnesota Computers for Schools actually didn’t start out in schools. They first began working with offenders in the prison system to build work skills so that when they were released, they’d have options for employment. For the first 21 years of the organization, they helped train offenders in the Stillwater Correctional Facility on computer recycling and refurbishing.

Eventually, the organization moved into the school district after seeing a need for schools to have access to affordable technology equipment. “We saw a way to reuse previously used computers and put them in schools so that schools could stretch their technology dollars and be able to have access to the equipment that they needed,” said McMahon.

Since the pandemic, many schools have moved to hybrid or completely online learning. With this, many students needed to find a way to get access to a computer. That’s where Minnesota Computers for Schools comes in to help.

“We hear from students every day who are trying to keep up with school on their cell phones. If you think about trying to write a three page paper on your cell phone, that’s incredibly difficult,” McMahon said. She went on to point out that they’ve recently seen the educational and opportunity gap widen between people who have lower income levels. They are working to make sure that everyone gets the tools they need to succeed.

One of the ways they are doing this is by donating computers directly to teachers to lend to their students for the school year. Students can also reach out to the non-profit through their Life Long Learner program. Here, Minnesota Computers for Schools gives the student a computer set up at home for free.

McMahon said there’s been an increase in individuals who want to donate since the pandemic. “We have set up an individual donation system at our warehouse in Minneapolis, so folks can drop off their used computers directly at our office too,” said McMahon.

Minnesota Computers for Schools also offers a handful of technical skill courses. They offer IT training for adults for free by partnering with other Twin Cities nonprofits. These classes start at the basic level on computer functions to the more advanced level of a paid internship with the organization.

They also offer STEM training for young students to spark their interest in technology. “It’s  something that they can do to build confidence around like tech skills and show it as a possible path for them,” said McMahon.

How you can help

Right now, the nonprofits biggest need is good quality computer donations. For information on how to donate, you can visit their website. “I hear from parents who have four kids in one computer, and everyone’s trying to work and do their schoolwork. It’s just not working right now for a lot of families. The more computers we get in, the more we can help people who need it,” said McMahon.